I never imagined that I would ever be involved in presenting awards to graduating students, but here I am, a Governor of the University of South Wales presiding over the Caerleon campus graduation ceremony with the Vice Chancellor, Julie Lydon, on 6 September 2013. As it happens, this was the first occasion on which both Chair and VC of the university were women. 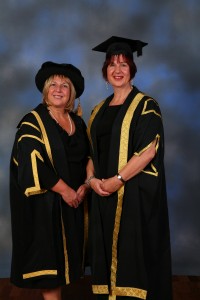 I am wearing an academic gown for the first time in my life. When I graduated, I decided not to go to my ceremony on the grounds that the University of London had not chosen my preferred candidate to be Chancellor. With other radicals in the student union, I had campaigned for Nelson Mandela. OK he might have been imprisoned on Robben Island at the time, but we fervently believed that an honorary position in British academe would exert pressure on the racist South African government and he would be released in no time. Angrily, I decided to boycott the ceremony with the newly appointed Chancellor, the Queen Mother, and so deprived my parents of a photo of me in a cap and gown getting my degree.

It was a huge joy and privilege to be Chair of the University of South Wales for the day, to celebrate our graduates’ great successes and to wish them well in their future lives. To see the parade of talent and promise brought a tear to the eye. I have attended both my own children’s graduations this summer, and, bursting with pride, I desperately wanted those graduation photos. My son and daughter had the good grace to provide me with said photos, even though neither felt particularly inclined to do so. Well, now I have my own graduation photo too. My dad has died, but my mum has the photo at long last, and I feel really good about that.