Just back from shooting a film about the Berber Marriage Festival in Morocco’s High Atlas. A wonderful privilege to spend a week with Mohamed and Fatema, who met three months ago for one hour and decided to marry. They invited us to join them as they met for only the third time, to tie the knot with 37 other couples. We filmed in their homes, exploring their traditional customs as Amazigh people, the name they choose for themselves, rather than Berber. 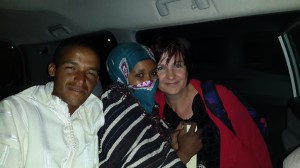 Mohamed, Fatema and me

We held back to give them privacy during the ceremony itself, and some families were angry at the media presence, even threatening us with violence. Hardly surprising when one French crew had brought a fake bride and groom and tried to pass them off as genuine. Thanks to a timely intervention by the regional Governor, and to our brilliant fixer Reda Fakhar, we maintained good relationships and personal safety, and most importantly Mohamed and Fatema were happy. The film will be part of a series of three about festivals of birth, marriage and death, produced by Green Bay Media for France 5 and S4C.